With his father Percy Alliss, who was among the finest players of his generation, it was perhaps inevitable that Peter would also make a career in golf. Percy hired Peter as his unpaid assistant at Ferndown Golf Club, allowing him time off during midweek to compete in tournaments. With some degree of success in his first professional tournaments, Peter quickly established himself among the top young players of the time.

Between 1954 and 1969, he won 21 professional tournaments – including three British PGA championships and was twice winner of the Vardon Trophy. In September 1958, he won the national championships of Italy, Spain, and Portugal in three consecutive weeks.

Peter played in the Ryder Cup on eight occasions – in the days before the team became Europe of course. In 1963 he beat Arnold Palmer and halved with Tony Lema on the same day…

His first appearance in the Ryder Cup was in 1953, and with the single exception of 1955, he represented Great Britain and Ireland in the event until 1969. He is one of only two father-and-son duos to have represented their country at this level.

He spent just six weeks on the American tour, in 1954, and therefore was  known primarily as a commentator in the USA. Peter retired from the professional golf circuit in 1969. 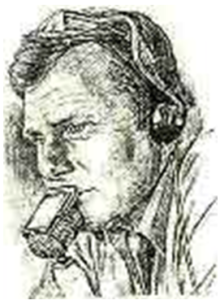 “When it comes to painting a picture with words, he’s nothing short of Rembrandt…”

Peter made his broadcasting debut way back in 1961, as part of the BBC team covering the Open Championship at Birkdale which was won by Arnold Palmer. His retirement from international golf at the relatively early age of 38 led to a full-time career “on the other side of the ropes.” By 1978 he was the BBC’s chief golf commentator following the death of his co-host and great friend Henry Longhurst.

Peter once claimed he was a golf commentator only because he was “there as an old player, a lover of the game and a good weaver of stories”. Modesty would prevent him saying that Golf Digest described him as “the greatest golf commentator ever” – but to many that’s what he was.

“One good thing about rain in Scotland — most of it ends up as Scotch.”

(On hearing a spectator shout: “get in the hole!”)

But it’s not only as a commentator that Peter is revered: he became a part of TV history, fronting 140 episodes of the popular BBC series Pro-Celebrity Golf, between 1974 and 1988, and progressed to an informal chat show on the fairways, Around with Alliss. His most recent television series, A Golfer’s Travels, is still being shown across the world.

This is a link to a radio programme from Surrey Radio about Peter;

Peter was born in Berlin in 1931, the son of the famous British professional Percy Alliss one of Britain’s leading players between 1920 and 1939.

Peter was recognised around the world for his television commentaries for ABC in the United States and the BBC in Europe, as well as working for the Australian and Canadian Broadcasting Corporations.

He wrote 20 books, the latest being Golf – The Cure for a Grumpy Old Man, and he also wrote regularly for Golf International and Fairway to Green magazines.

Peter never learned to swim. He said: “I can float on my back across the Atlantic, but turn me face down and it’s over…”

Peter helped Sean Connery with his golf before the filming of Goldfinger, which involved James Bond playing against the eponymous villain at what is now Stoke Park GC.

A variety of potato – is called ‘King Peter’… after Mr Alliss (or solanum tuberosum rex petrus to give it its scientific name).

Peter’s boyhood dream was to be a tail gunner in the RAF. During his national service, however, he joined the ground-based RAF regiment and was restricted to firing from terra firma …

Peter owned up to reading only four books by the time he turned 40. Lorna Doone and Treasure Island were two. “I can’t remember the other two,” he admitted

To just read the text, here it is.

Peter Alliss, the legendary BBC golf commentator, has died at the age of 89.

Alliss, known as ‘the voice of golf’ to fans around the world, has been synonymous with the BBC’s golf coverage for more than half a century.

Having first appeared on the BBC in 1961, he was made lead golf commentator in 1978 after retiring as a player.

“It is with great sadness we announce the passing of golfing and broadcast legend Peter Alliss,” said Alliss’ family.

In a statement, they described his death as “unexpected but peaceful”.

They added: “Peter was a devoted husband, father and grandfather and his family ask for privacy at this difficult time.”

Alliss provided the soundtrack to many of golf’s most memorable moments, with November’s Masters the last tournament he covered.

“Peter was the voice of golf. He was an absolute master of his craft with a unique ability to capture a moment with a magical turn of phrase that no one else could match,” said Barbara Slater, director of BBC Sport.

As a player, Alliss won 31 tournaments and he and his father Percy were the first father-son duo to compete in the Ryder Cup, when it was a contest between Great Britain and the United States.

In 2012, he was inducted into the World Golf Hall of Fame in the Lifetime Achievement category.

‘One of the greatest broadcasters of his generation’ – Alliss as commentator

After retiring from playing golf – in a professional sense, at least – Alliss moved into the commentary booth, where his descriptive and dead-pan style became the soundtrack to the BBC’s coverage of major golf events.

“His inimitable tone, humour and command of the microphone will be sorely missed. His often legendary commentaries will be long remembered,” said the BBC.

Alliss’ first experience behind the microphone came at the 1961 Open Championship, remarkably, in the same tournament he was challenging Arnold Palmer on the course.

In 1978 he was appointed the BBC’s chief golf commentator following the death of his co-host and great friend Henry Longhurst.

“I’m there as an old player, a lover of the game and a good weaver of stories,” is how Alliss once described his television role.

To the majority of British golf fans – and many more across the world – his soothing voice became synonymous as the audio accompaniment to the likes of Seve Ballesteros, Nick Faldo and Tiger Woods winning the sport’s biggest prizes.

Only a few weeks ago, Alliss described the moment when world number one Dustin Johnson won the Masters at Augusta National Golf Club.

“After six decades behind the microphone, he was just a month ago at the incredible age of 89 doing what he loved – commentating for the BBC on the Masters,” said Slater.

“He transcended his sport as one of the greatest broadcasters of his generation.”

With his father Percy established as one of England’s leading professional players in the 1920s and 1930s, it was perhaps inevitable the golf genes were passed down to Alliss.

Alliss was born in Berlin, where his father was the professional at the glamorous Wannsee club, and apparently weighed a European record 14lbs 11oz when he arrived in 1931.

Those hereditary blessings helped him blossom into a fine ball striker himself, establishing Alliss as one of the brightest young players of the time.

Between 1954 and 1969, he won 21 professional tournaments – including three British PGA Championships – and was twice winner of the Harry Vardon Trophy, given to the leading European player of the year.

The biggest title evaded him, however. Alliss came within four shots of lifting the Claret Jug in 1954, one of five top-10 finishes he had at the Open Championship.

Part of the reason he did not claim more of the biggest individual prizes seemed to be his infamously unreliable putting.

“I began to twitch on the short putts,” he said after his decision to retire from the international game aged 38.

Yet, with the same self-deprecating humour he would bring to his commentary, Alliss made light of his deficiency.

Each of his luxury cars – one of the things his princely golf earnings of £30,000 allowed him to indulge – was said to have been fitted with a personalised number plate: ‘3 Put’.

He won more than 30 tournaments at home and abroad including the Spanish, Italian and Portuguese Opens. But it is for his broadcasting skills that he will be most remembered.

Golf gravitas was supplemented by sharp wit and whimsy that made his a uniquely charming voice. It brought him millions of fans on both sides of the Atlantic.

As golf grew ever more popular, he became one of Britain’s most famous figures, hosting the highly successful Pro-Celebrity Golf programme on BBC television and his own chat show ‘Around with Alliss’, which attracted many of the biggest entertainment stars of the 1970s and ’80s.

His influence on golf stretched far and wide. He had a course architecture business with Dave Thomas that included among its commissions The Belfry, which has hosted four Ryder Cups. Alliss also wrote several books on the game.

He was a traditionalist who enjoyed the peculiarities of golf club life and he remained a brilliant and buoyant raconteur until the very end. But above all, he was still interested and fascinated by the sport. He was determined to carry on commentating, looking forward to being there for the 150th Open at St Andrews in 2022.

Following the news on Sunday of Alliss’ death, tributes poured in from former and current players, golf’s governing bodies, celebrities, journalists and fans.

Denmark’s Thomas Bjorn, who captained Europe to Ryder Cup victory in 2019, said Alliss was a “great man”.
Five-time major winner Phil Mickelson, who in 2012 was inducted into the World Golf Hall of Fame with Alliss and Britain’s first Masters champion, Sandy Lyle, paid an affectionate tribute.

The European Tour said it was “deeply saddened” at his death, describing him as “truly one of golf’s greats”.

“Peter made an indelible mark on everything he did in our game, but especially as a player and a broadcaster, and he leaves a remarkable legacy,” said Keith Pelley, European Tour chief executive.
Match of the Day presenter Gary Lineker, who has also fronted the BBC’s Masters and Open coverage in the past, and Monty Python actor John Cleese were among the first to mourn Alliss’ passing.
BBC director general Tim Davie said Alliss’ commentary “brought the game to life” for millions of people.

“Nobody told the story of golf quite like Peter Alliss,” he added.

“He captured golf’s drama with insight, wisdom, and humanity. He was a legendary commentator.”