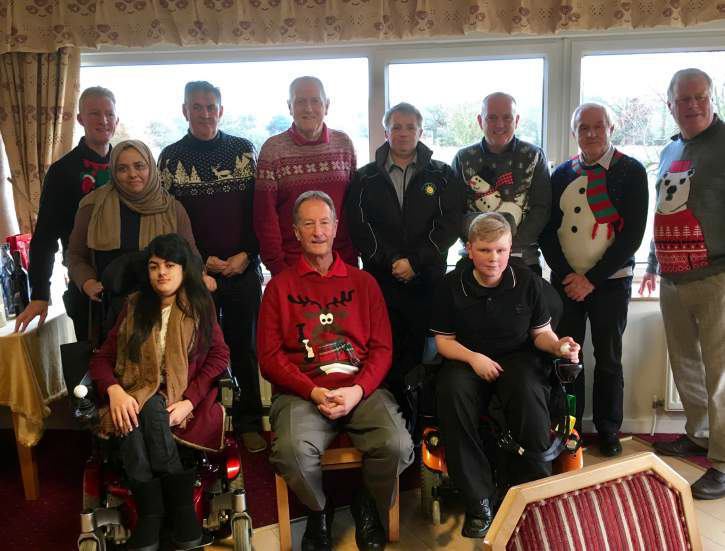 A Cheshire golf society of just 40 active members – Frodsham & Helsby Golf Society – managed to raise enough funds in one season for TWO powered wheelchairs. 2016 Captain Phil Davies chose the Peter Alliss Masters as his Captain’s Charity in the hope of raising funds that would go some way towards the £3,000 needed to buy a powered wheelchair. However, such was the generosity and resourcefulness of the society’s members, a magnificent £5,300 was raised.
With a top-up from the Charity’s central funds to take the figure up to £6,000, the Society was able to present chairs to two deserving youngsters at its final event of the year, its Christmas event at Helsby Golf Club. The children receiving the chairs were Alainah Hussain, aged 16 from Nelson in Lancashire and Dylan Kelsall, aged 14 from Stoke-on-Trent. They are pictured above with Captain Phil (seated) and behind them (l-to-r) Kieran McCabe (FHGS Secretary) , Zahida Yunis (Alainah’s Mum), Colin Moss (FHGS Treasurer), Ray Feldwick (PAM Treasurer), Warren Kelsall (Dylan’s Dad), Steve Cunniffe (Helsby GC Captain), Jim Potter (Helsby GC President) and Alex Walters (FHGS Captain Elect).

As Phil explains: “The way the members took on this challenge was amazing. They came up with all sorts of ideas for raising funds as part of our monthly golfing get togethers. Ideas included auctions of complimentary rounds of golf, sweeps, swear boxes and individual donations. I’m really proud of what everyone’s achieved and it made it all worthwhile when we saw those two youngsters receiving their new chairs just before Christmas.”

If you want more details of just how the society raised the money, Phil is happy for you to email him at PJDsolutions@aol.com.